Through maintaining provocative cliques, the US keeps creating rivalries in Indo Pacific which drives the global maritime order toward competition and conflict as “Indo-Pacific Partnership for Maritime Domain Awareness (IPMDA)” enters its eighth month since its inception in May among Quad members.

Experts from China and ASEAN revealed that the nature of IPMDA is intelligence acquisition and surveillance using satellites, a move analysts warn could potentially lead to militarization of the region.

Experts also warn that the US is constantly coming up with new tactics to promote its maritime hegemony, spreading the China threat theory, which is in sharp contrast to China’s inclusive and equity-oriented blue economy partnerships in the region.

The US State Department spokesman Ned Price issued a statement on Monday to reiterate “US’ support for the Philippines in the South China Sea” as their so-called reports found “the increasing number of Chinese boats…has disrupted the livelihoods of Filipino fishermen.”

Price’s groundless accusations were soon refuted by Chinese Embassy in the Philippines which via a Tuesday statement called Price’s statement “contains unfounded accusations against China that attempt to stir up troubles and drive a wedge between China and the Philippines.”

The spokesman of the Chinese embassy pointed out that the US’ continuous interference in the South China Sea, creating tensions and harming regional peace and stability, is not to help anyone but to serve its own geopolitical interests. China and Philippines share the Asian wisdom of settling differences through dialogue and consultations, and the South China Sea situation has maintained overall stability, said the spokesman.

During the second in-person Quad Leaders’ Summit held in Japan on May 24, the IPMDA initiative was announced in a joint statement. The initiative is regarded as a direct response to China’s maritime activities in the Indian and Pacific Oceans, under their touted banner of “transform[ing] the ability of partners in the Pacific Islands, Southeast Asia, and the Indian Ocean region to fully monitor the waters on their shores, and, in turn, uphold a free and open Indo-Pacific.”

Now, half a year later, what has the IPMDA, which is widely seen a plan targeting China, done to push America’s hegemonic ambition? Has the US succeeded in its plot to act as the “world’s maritime police” and constantly sling mud at China? How do Southeast Asiancountries view the IPMDA?

The US is now attempting to advance IPMDA through a variety of means including technological cooperation, agenda setting, narrative competition, and diplomatic grandstanding, observers pointed out.

More, US experts revealed that Quad members plan to purchase the data of US-based leading commercial operator HawkEye360 and share the data with partners across the region through existing channels such as the US Navy’s SeaVision platform, which is used by nearly every partner in the region and the above-mentioned four centers.

In terms of agenda setting, since September, some think tanks and media sources including the New York Times have been hyping up China’s alleged maritime threat, writing a number of articles slandering the legal activities of Chinese fishing boats and exaggerating their harm to the marine environment. Under the tool of narrative competition, in recent years, the US has extended its smear campaign to the far ocean and created rumors across the world’s major oceans in order to mobilize more members to contain and counter China, Hu Bo, the director of the South China Sea Strategic Situation Probing Initiative (SCSPI), told the Global Times.

Chinese fishing boats have become the direct target of the US-led Quad. In fact, the Chinese government has never shied away from illegal fishing problems and has made increasingly effective measures to regulate China’s distant-water fishing activities by raising fines and confiscating fishing vessels. Moreover, China has taken the initiative to conduct a fishing moratorium in some high sea areas. However, various agencies affiliated to Quad member countries suggest that Chinese fishing fleets are the biggest culprit of the global Illegal, unreported, and unregulated (IUU) fishing challenge, said Hu.

The number of China’s IUU fishing activities have significantly declined as China pays more attention to environmental protection. More noteworthy, China does not have the largest number of fishing vessels in the Indian and Pacific Oceans or even in the world, Hu said. However, Quad members, while grappling with anxiety about the so-called China threat, seem to be uninterested in the IUU fishing activities of countries other than China, the analyst suggested.

By contrast, the US has not yet ratified the United Nations Convention on the Law of the Sea. The number of days of its seine fishing vessels operating on the high seas exceeded the number of days specified by relevant fishery management organizations, and it has violated the regulations for many consecutive years.

The tracking system of the US may not consider China’s legitimate rights and interests in these areas, and appears to only disclose the “abnormal behavior” of Chinese fishing vessels, Hu warned.

He argued that the Quad possibly intends to further amplify the “China threat” through diplomatic manipulation and media speculation to stir up endless diplomatic friction and quarrels for China, in order to fundamentally deconstruct the legitimacy of China’s maritime activities. 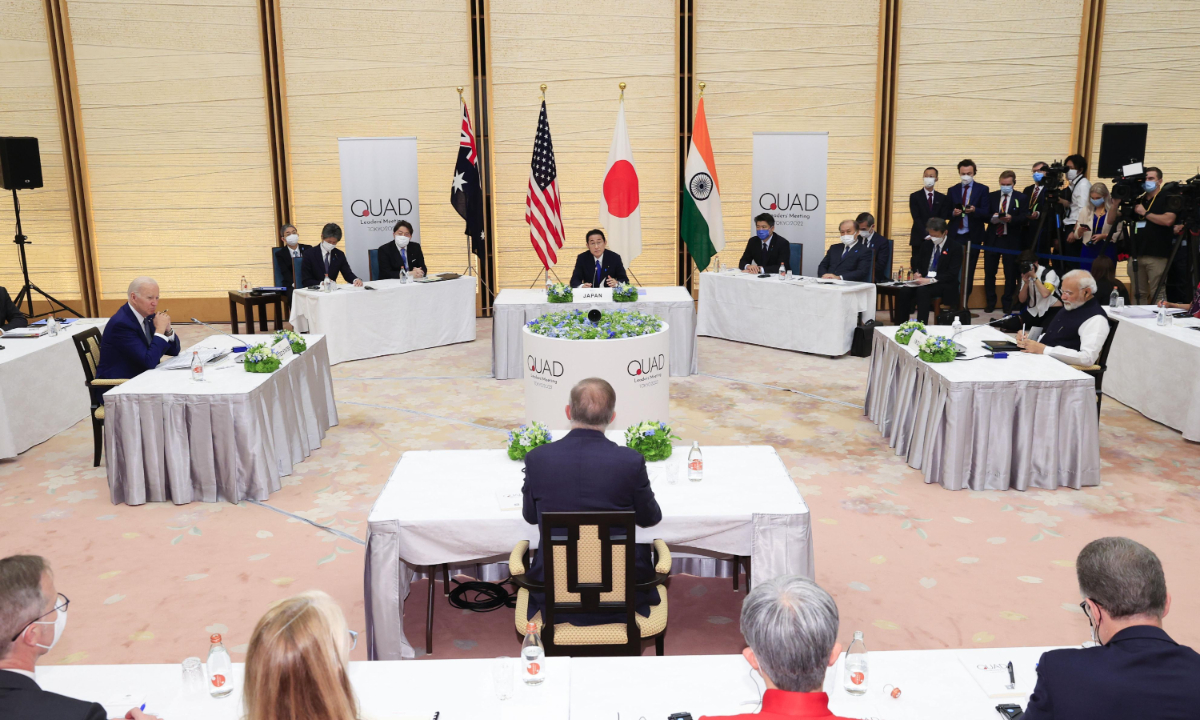 Spur militarization in the region

On November 21, US Vice President Kamala Harris visited the Philippines to reaffirm the US’ commitment to the defense alliance with the Philippines. She traveled to Palawan during the visit, where she met with residents, civil society leaders, and Philippine Coast Guard officials to discuss the local impact of IUU activities. Harris also said the US stands by the Philippines in the face of “intimidation and coercion in the South China Sea.”

If the real purpose of the IPMDA initiative is to reduce illegal fishing in the Indo-Pacific, the US should not exclude China from the framework, but cooperate with China. However, if the goal of the initiative is to isolate and alienate China, it may lead to the escalation of tensions among Quad countries, China, and other relevant countries, and in turn encourage China to strengthen its defense and security deterrence capabilities, leaving the Philippines and ASEAN countries in a new Cold War, Anna Malindog-Uy, vice president of Philippines Asian Century Strategic Studies Institute, told the Global Times.

Malindog-Uy called upon Asia-Pacific countries, including China, to engage in multilateral dialogue on fishery management, environmental protection, energy development, and other issues, and strengthen mutual trust among Asia-Pacific countries through cooperation in economic and maritime activities.

Some scholars from ASEAN countries have highly underlined China’s efforts in such cooperative frameworks such as “blue economic passages” that China proposed in 2017.

“ASEAN countries are typically broadly supportive of initiatives that could promote peace and prosperity for the region and beyond. In this regard, ‘blue economic passages’ that has laid out a number of technical and economic cooperative efforts are most welcome. It is hoped that China will redouble its efforts in providing technical assistance and promoting economic partnership in this regard,” Ei Sun OH, a senior fellow at the Singapore Institute of International Affairs and principal adviser to the Pacific Research Center of Malaysia, told the Global Times. A symposium on Building Blue Economy Partnership is held in South China’s Hainan on November 27, 2022.

When the Quad tried to suppress China on the grounds of “illegal fishing” through IPMDA, scholars from China and ASEAN countries were in the process of contributing ideas for China-ASEAN blue economy cooperation.

The China Institute for Reform and Development (CIRD) and the China Oceanic Development Foundation jointly hosted a forum recently to focus on building a blue economy partnership to boost sustainable marine development.

Chi Fulin, the head of CIRD, suggested that there is great potential for sustainable utilization of marine resources. On the one hand, the world economy is increasingly dependent on the sea, as more than three billion people in the world depend on the sea for their livelihood, and more than 350 million jobs are directly related to the sea. On the other hand, global marine ecological governance is still less effective, as, for instance, only 7.9 percent of the world’s sea area has been effectively protected, and nearly 40 percent of marine fishery resources have been overexploited and are on the verge of exhaustion. Improving the effectiveness of global ocean governance urgently requires global action, Chi told the Global Times.

The expert suggested the urgent building of an ASEAN-China committee on sustainable marine development and governance to promote concerted policies and environmental surveillance among relevant countries in the South China Sea.

Ong Tee Keat, former transport minister of Malaysia, advised at the forum to carry out a joint survey between China and ASEAN on fishery resources, in order to promote information sharing between fishery authorities on both sides, and heighten the multi-level mechanism for China-ASEAN fishery cooperation.